Frantic to finish our preparations for our 3-4 month trip, we were up until 3 am and then got about an hour of sleep before getting on the train. We had a very quiet and peaceful 2.5 day train ride to chill and relax until the walking began. We arrived in East Glacier just outside of Glacier National Park, and began our walk across the Pacific Northwest, starting at Chief Mountain border customs right next to the Canadian border. 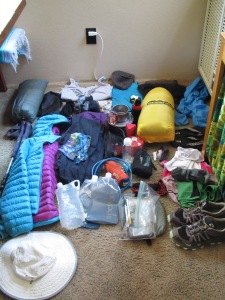 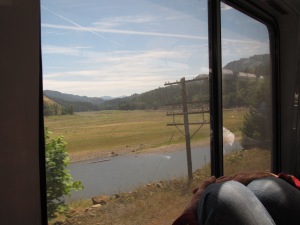 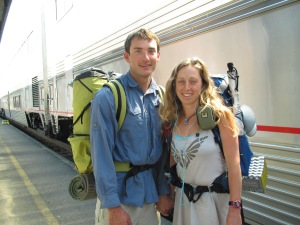 Our first day was exciting and had our feet moving quickly. We had plenty of water, never having to think about where we might find it next, just taking it when we needed it. We met several other hikers on our first day, which was refreshing on a trail we expected to be almost entirely alone on. The walking has been nice, the trails in Glacier are well made, and it was a nice way to ease into this very difficult trail. There were designated campsites with poles built into food prep areas for handing our food, which made life pretty easy. 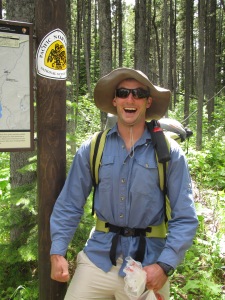 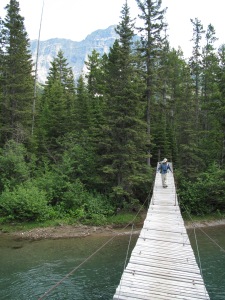 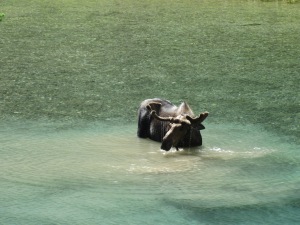 We were blessed to meet our first ever moose! He was busy eating grass at the bottom of the lake, and enjoying fully immersing himself and bobbing up and down in the weightlessness of the water. We kept our distance, remembering someone saying that moose are some of the most dangerous wildlife. Feeling safe down the trail, we came upon a perfect jumping rock directly into deep turquoise water. We jumped in reluctantly, and swam out as quickly as we had fallen in. Glacial lakes are not anywhere close to body temperature. The moose, still 200 yards away in the shallower part of the lake, still busy dunking his head and munching. Butterflies were flying around, and the mosquito’s couldn’t find us with all the cold water on us. What a refreshing swim with Mr. Moose! We have had no issues with bears but have found their tracks, scat, along with scarred tree’s and turned over rocks.

After having a beautiful, but steep, descent out of the park (damn that went by too fast!), I was reluctant to leave the last campsite at Bowman Lake, afraid of being in a crowded place full of people, but I went anyway. I was pleasantly surprised when we walked into the tiny “town” of Polebridge, where we were treated kindly by the locals at the Polebridge Mercantile which had all kinds of deliciously made baked goods among other food treasures. We stayed two nights at the North Fork Hostel that was so pleasant and quaint. A kind man by the name of Oliver owned the hostel and it felt like we were staying in his home – a rustic old cabin tucked into the woods next to a mighty river. We hand washed our clothes and enjoyed conversation with Oliver’s helper, Amy. She was a humble cyclist who worked seasonally and used her bicycle to travel across the country to all of her odd jobs in beautiful places. I enjoyed her big smile and wished I had gotten to know her a little more. We spent hours by the river, I read books about grizzly bears from Oliver’s library, and Ted made some music. We sat there for so long that many animals passed by. We saw geese, osprey, hummingbirds, and even an otter! In the community kitchen we met other people staying in the hostel who gave Ted and I their fruit, and Oliver gave us some kale – making a fantastic breakfast that we are so grateful for. It’s not always easy to find fresh food in tiny towns like this one, so it was truly heaven sent. Our first trail magic on the Pacific Northwest Trail. Polebridge was probably the coolest trail town stop yet! 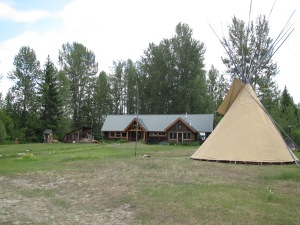 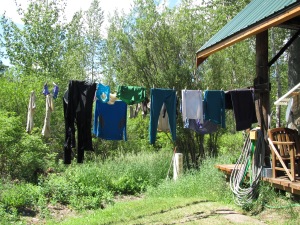 We hiked out, doing some road walking, the trail is not complete, so there are lots of roads to walk on that connect to other roads and or trails along this journey. I personally don’t mind them, because they are level and easy to walk on, unlike what we experienced going into the foothills of Montana. Water became scarce, temperatures hovered in the 80 to 100 degree range, trails had no switchbacks and went straight up and down the mountains, not to mention hundreds of blood thirsty insects constantly berating us. Here in Montana, I have experienced some of the steepest, most difficult terrain I’ve ever walked on. It’s been two weeks now, and my legs are getting BUFF! They better be, after all this crazy climbing. 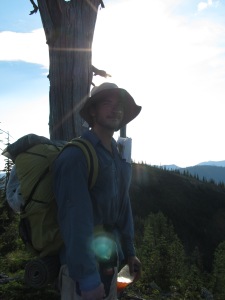 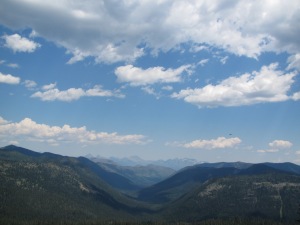 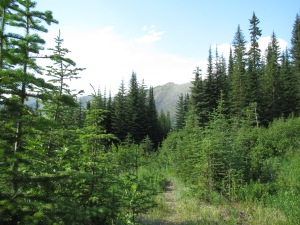 We took another zero day in Eureka Montana, to rest our feet and let our bodies adjust to the intense hiking. We briefly hiked with a woman trail named BloodyMary who is really fast, and I think we got a little excited and pushed ourselves beyond what we are used to. She is fresh off of the PCT, finishing a southbound hike last December, we have been sitting on our butts for months, so we are reminded to listen to our bodies and take it easy until the bigger miles come more naturally to us. As of now, we are averaging 15 (hard) miles a day. Here we go, back into the hot hot hills of Montana. I’ll post another blog when I find another computer. Love and light from the trail.

10 thoughts on “Swimming With Moose and Blood Thirsty Insects”