We spent a couple nights in Forks, enjoying the usual luxuries of a town and preparing for the end of our hike, which was too near. When we hitch hiked out, we were picked up by a nice old man, Tom and his dog Tinkerbell. We could sense that he lived only with Tinkerbell and was very happy to have someone to talk to. He was just on his way to his favorite bar to have a cocktail. He told us of his life on the Olympic Peninsula and took us back to the trail. I had a small feeling of sadness when we said goodbye, wishing that I could have given him more than a few minutes of conversation. As we hiked on dirt roads I could feel the ocean in the wind, but I could not yet hear it. The mountain ranges were behind us, there were none to climb – now we are going to find the ocean, our final destination. At one moment I heard a voice of a man calling out to us “Hello.. Hello”. I responded with a questionable “Hello” and he repeated hello to us a few more times, ignoring my response – which just creeped me out so our pace quickened. He was somewhere on another road nearby and had heard us talking. We reached a dead fall blocking the road, and once we passed it I felt safer knowing no cars could access me where I was, and whoever that stranger was, we would never meet.

I walked through knee high grass and saw a mosquito hawk fly out, disturbed by my steps. We took a short break here, as I witnessed the end of this mosquito hawk who had flown right into the web of a hungry spider. I felt a little responsible. We hiked to the end of the road together and found a single track trail that would take us to the ocean. Like a portal into another world, we stepped into this enchanted forest, with its mushrooms, banana slugs, giant trees, and beams of light.

For the first time in almost three months, I heard the waves flowing onto the beach. Soon after I could actually see the sparkles over the water shining through the forest. My first sight of the ocean. We hiked forward, toward this elusive beauty we had traveled so far to reach. The moist brown soil soft beneath my steps. I carefully walked through bushes of ferns and over large roots reaching across the pathway.

Suddenly, like the turning of a page, the soil turned to white sand, and the shady forest turned to bright open light and nothing but ocean and sand existed in front of me. We did it. We walked to the ocean from Montana! We did it! We are here! The Pacific Ocean! We walked here! We did! 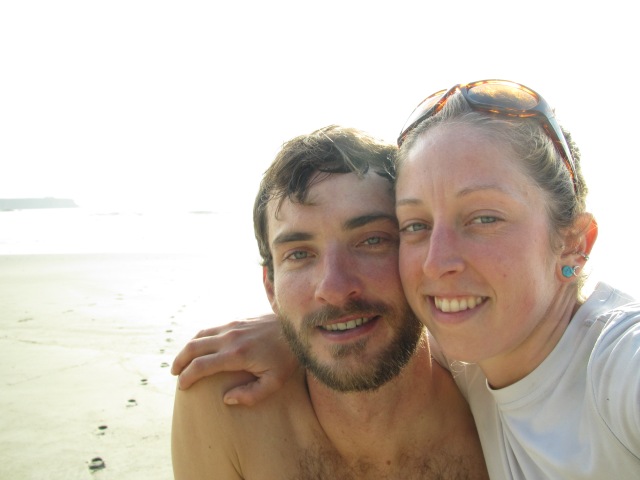 But the journey isn’t over yet. We still have three more days to get to know this ocean a little more intimately than we ever have – even being born and raised San Diegans! We have never known this ocean the way we will come to at our journey’s end. We are going to follow the shoreline to our final destination at Cape Alava, the end of the Pacific Northwest Trail, and the furthest western point of the Continental United States.

There weren’t any volleyball courts, no bikini-clad teens, no boardwalk, and no dog poop! This was a wild place. Coming from a city with densely populated beaches, this is uncharted territory. This was a real beach – this is what beaches used to look like before people built resorts on them and roads to them. This is wilderness.

The tides are something I never tried to understand, but walking along the ocean for a few days will get you accustomed. I carried a small tide chart, but we barely followed them intentionally. Our habits made us lucky each day, figuring we did not have a lot of miles to travel, we would sleep in and enjoy the morning. Leaving camp around ten a.m. we were already on a wide beach, by the time we came to a headland, the tide was just coming to it’s highest – and guess what, it’s lunchtime! Our long two to three hour breaks would send us on our walk as the tide went back down.

In some places, we could only pass a headland at low tide, so often times we had to take the high route up and over the capes. Climbing ropes and ladders, and traipsing through what had become familiar rain forest. The walking was easy along the beach, and the climbs were exhilarating.

Each day we felt the sun moving over us from the east and finishing it’s show on the horizon to the west. I have always made it a point to watch sun sets whenever possible, and by the time we reached this big beautiful sea, I was deprived. We arrived to our campsites by the setting of the sun, and would eat our dinners on the beach to say our thanks to such a glorious day. 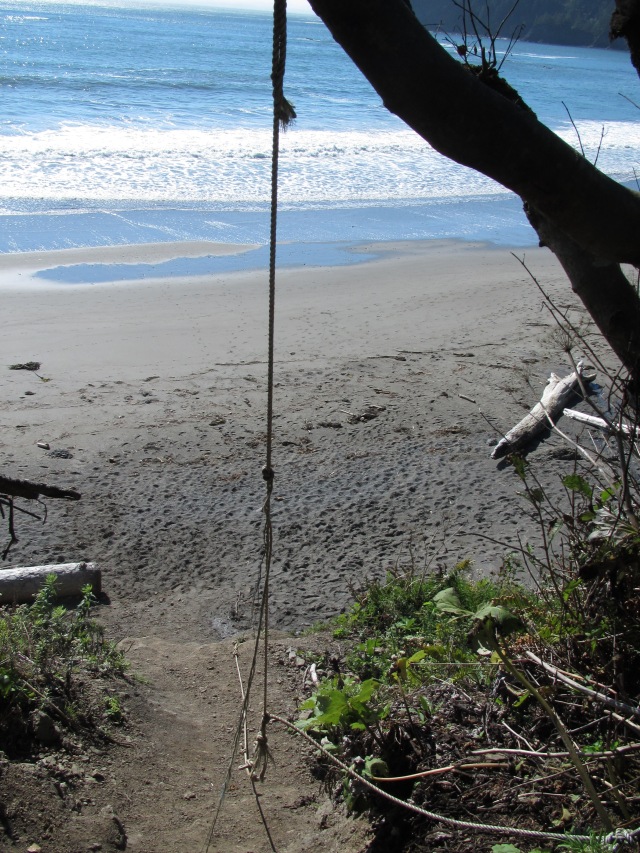 Roadwalks. And you thought they were over! Nope. We had to walk a couple of miles into the town of La Push along a sketchy road. We munched on snacks at their convenient store and then marched through town to the Marina where we hoped to find a local fisherman to take us across the river where we could continue our journey North to Cape Alava. We were unlucky enough to arrive their after the Marina had closed and no one was around. Ted and I ate a meal of fish and rice for unreasonable prices at the restaurant next door. Then headed down to the beach where we would camp, hoping to find a ride by morning. We tucked our tent as far away from the ocean as we could, noting how far up the tide line went, and we managed to stay within just a few feet of the water at it’s highest.

In the morning we headed back to the Marina and met a nice man who happily took us across the water. He filled our heads with history and Native lore before sending us off onto the sea stack and drift wood covered beaches. 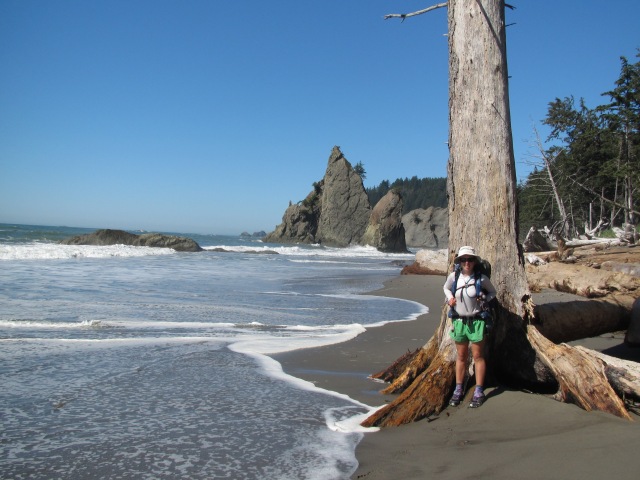 We ate our lunch at a rock fondly known as “Hole in the wall”. It was covered in waves when we arrived, but we stayed so long that the tide completely went out and like children discovering a new land, we went in. We stepped lightly as we moved over tide pools full of anemones and crabs, enjoying the deep crashing of the ocean like the heartbeat of the earth, beating at my feet and caressing my toes. 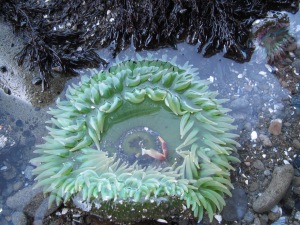 Little did we know how much more tide pools we would have to travel over. It took us all day to travel eight miles, the rocks, capes, and algae made for a slow-going day. But not an unrewarding one.. no ankles were twisted and no heads were bruised. We were headed toward an official camping area when we found a magically unofficial one about half a mile early. The beach was huge and the sea stacks invited us for sun set. Our campsite was in the forest on the bluff. We had to climb a rope about thirty feet up to reach a small flat space with a driftwood bench, a fire ring, and a tent space – not to mention a massive mushroom and a view of the sun set. We had this spot all to ourselves, and we could do nothing but ravish in it’s perfection.

Once the sun had set, we seemed to be thinking the same thing, when I said “I’m going for a walk, want to come?” We climbed down our rope and strolled barefoot under the clear black sky dotted with billions of stars and a bright milky way galaxy smiling down at us. The ocean in it’s ever-flowing sounds, wet sand beneath my naked toes, Ted by my side, and peace in my heart. We walked.

The next morning was our last full day of thru-hiking the PNT and we knew it. We enjoyed every last moment at our campsite, the literal best campsite of the entire summer. And when it was time to go, our feet took us slowly along the beaches and tide pools to our final camp site on the beach. Goodnight, said the sun. Tomorrow is our last day. 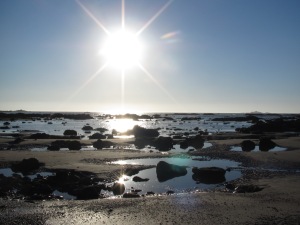 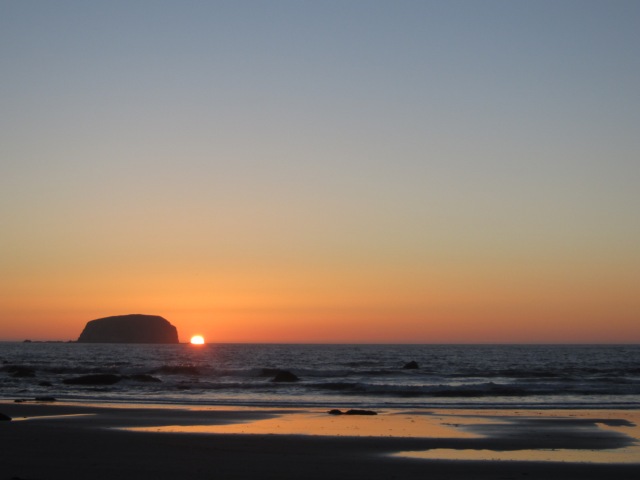 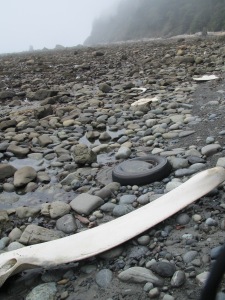 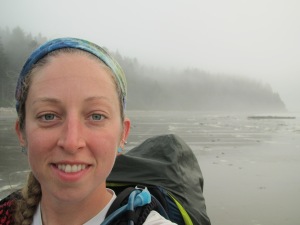 On the final day of our hike, we began to see day hikers. We also saw deer and found prints of coyotes in the sand. There was a lot of junk washed ashore, mostly from Japan. Plastic bottles written in Japanese is how I figured that out. A lot of plastic buoy’s, nets, crates, and all sorts of junk – as well as the huge bones of whales. Who threw a recliner into the ocean?

Since the past few days had been traveled at unbelievably slow paces, we figured today would be no different. So we hustled. My parents were meeting us at the end of the trail and I had told them we would be there in the late afternoon. More and more people came into view and a family approached us to ask us about some petroglyphs at Wedding Rocks. I stumbled. Had we passed Wedding Rocks without seeing them? I looked around and I saw an island, one that I recognized. It hit me. We had passed Wedding Rocks two miles ago, and suddenly we were at the western terminus of the Pacific Northwest Trail. Our hike was over. How did that happen so fast?? It was unexpected and hit me like a train. Suddenly we had nowhere to walk. Our hike was over.

Not before a celebration with hot totties! We had packed in a bottle of Jack Daniels, some raw local honey, and a fresh lemon for this special occasion. We spent three hours cheersing, lying in the sand, sleeping, laughing and sharing a few tears. We did it. We are thru hikers.

But wait, we had such a long break that the tide went down again and there was land access to the ACTUAL furthest western point. So we stashed our packs and ran out along this strip. We circled the island before running up it’s practically vertical slopes. Nothing up there but pine tree’s and soft grass. We looked out over the ocean in great reverence for our successful journey through the Pacific Northwest. What an amazing walk! 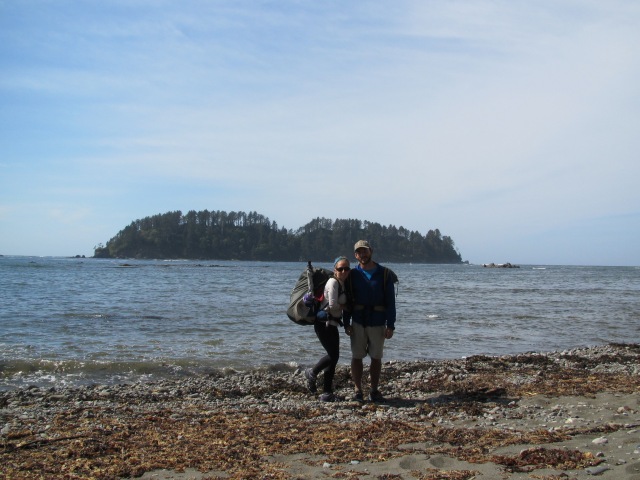 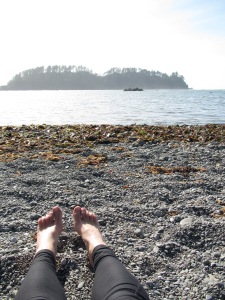 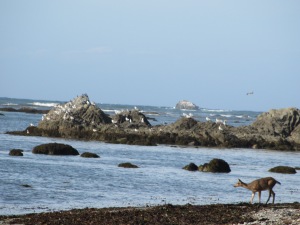 Our journey was 1,200 miles long which took us just under three months to complete, end to end from Glacier National Park all the way to the Pacific Ocean at Cape Alava.  Words can never express the challenges, the beauty, and the greatness of the personal rewards we reaped on our walk.

Thank you for following our journey! Stay tuned for my personal solo bicycle ride home from the end of the trail all the way down the West Coast and to my parents door in San Diego, California.