After a lovely night at Jami and Josh’s, the Pacific Northwest Trail’s new trail angels of Northport Washington, we learned of a fire in the way of our hike in the Kettle Crest Range, which is said to be a real highlight of the trail. Reluctantly, we decided the only thing to do was to get to the next access point beyond the fire closure, which was Sherman Pass outside of Republic. The local doctor, Craig, of the tiny town is a friend of our angels and he offered us a ride the next morning. Josh lent us his truck and kayaks to pass the day paddling at the Sheep Creek mouth into the Columbia river. I kept my distance from the swift waters of the Columbia, a little too deep and powerful in my opinion. It looked like that river could swallow me up without a trace. We stayed near the calm currents of Sheep Creek and even took a nap on a beach. We are grateful for the generosity of the people we meet along the way who give more than we could ever imagine. Thank you Josh, Jami, and Craig!

Another hiker had caught up to us, he caught a ride to Sherman Pass as well. We all hiked along into the afternoon and evening along old dirt forest roads. We found a campsite with a nice view and decided to call it a night after about 15 miles, with a late start. Our hike the next morning brought us through mostly forest along dirt roads with the occasional view which always reminded me of home. Eastern Washington has a very similar climate to the mountains we have in San Diego. Dry, hot, hilly, yellow grasses, and pine forests. The only thing missing was our oak tree’s! We ate dinner at the Thirteen Mile trailhead after scaring off a group of people with our backpacks and huge calf muscles. The idea of people walking out of the woods and no car parked at the trailhead is just mind boggling. We started a short 3 mile paved road walk along the highway 21 out of Republic, which would only take us an hour, when the most bizarre thing happened! There wasn’t much traffic, maybe two cars passed us in the first 20 minutes. A red car coming toward us with a busted headlight came to a screeching halt and suddenly turned the car around. All the while I am bracing myself for who knows what, something strange is about to happen. I look over and all these smiling faces are looking at me through rolled down windows. They start to yell “WE KNOW YOU! CASCADE LOCKS!” over and over again until my glazed look transforms into a glimpse of recognition. These people I had met at the Bridge of the Gods while hiking on the Pacific Crest Trail two years ago! We had sat together and talked for a couple hours, and Stacey was the girl who walked me across the bridge. It was a chance reconnection, that couldn’t be merely coincidence. We visited in the road for a few minutes before they sped off in the direction they were headed and Ted and I began walking towards our next camp at the abandoned Ten Mile Campground a couple miles down the road. We were flabbergasted, completely blown away by what had just happened, laughing all the way by the irony of life.

After another day or so of walking, we were at another road to get into Republic, the very long highway 20. We decided that we didn’t have enough food to get all the way to our next stop in Oroville, so we hitch hiked into town. Many people passed us, one was a young man, who I remember thinking he looked like someone who might pick up a hitch hiker, but alas he did not stop. About ten minutes passed and we saw his car coming back with his hazards on, he turned around and picked us up. He was on a solo road trip along the highway 20 and for some reason was pulled to come back and give us a lift. We were grateful. He dropped us off and I was charmed by this tiny town – everything within 1-2 blocks. An all natural, organic co-op! A mercantile/hardware store, a grocery store, pizza place, a hotel, laundromat, just everything a hiker could ever need. I was especially pleased with the co-op, that’s what made it stand out from the other towns. We reconnected with our friend Mike who started at the same time as us, we met him getting off of the same train in Glacier National Park over a month ago. After just one night we got a ride back to the trailhead with Mike. 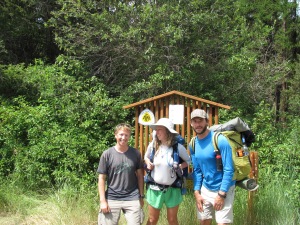 We had a nice trail to walk on for a little while, with good views, then we were back on the road again, walking along lots of private property. There were no houses, just lots of junk and trailers, we were a bit spooked by the people who lived there. They didn’t appear to have many hobbies other than perhaps drinking beer and target practice. When we reached the road intersection, there were real houses and people outside. They offered us a spot to camp for the night and we did. Mike was camped closer to their house and we could hear the one older man, who might have had a bit to drink, just talking his ear off for hours. Lying in our tent, I felt for the poor guy who was tired and wanted to sleep just like us. We talked for a bit before we fell asleep, and Mike’s trailname finally hit us. Flanders. We must name him. We fell asleep right then and there. Ted woke up with his water bottle left open. We were beat. As hikers usually are at that hour. Just done. 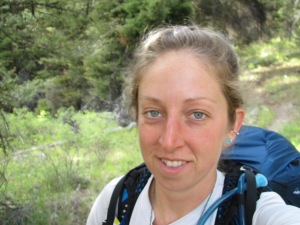 Goodmorning more roadwalking, yay! We can make the best of it, at least it is fast walking. We even saw a bald eagle getting harassed by a smaller hawk. Flanders had headed out earlier than us, as usual and we were determined to catch up to him. In passing, a farmer called out to us, “You’re only about 30 minutes behind that other guy!” We kept hoofin’ it till we got all the way to the Lake Bonaparte Resort, where low and behold, Flanders was there. Just as I suspected…We ordered a meal as he packed his things and headed back to the trail. Ted ordered the Bonaparte Bloater, a food challenge. It was a burger with three 1/4 lb beef patties, with bacon and cheese in between each patty, with onion rings on top and fries. He opted for a salad instead of fries, thinking it would allow him to succeed in the challenge which would award him the burger for free if he finished it in 45 minutes or less. He stopped at about 2/3 of the way though, feeling the cholesterol pumping through his veins. Stupid idea, he thought. Digestion is a real cause for slowing down. We had a huge climb ahead and tons of food in the bellies. We took three hours to get out of there, three hours! Then hiked at an unreasonably slow pace all the way to the top of Mount Bonaparte, where we would spend the night. With a very serious effort, we made it to the top of the lookout tower within just seconds of the sunset. 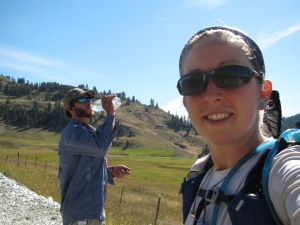 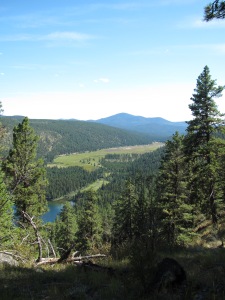 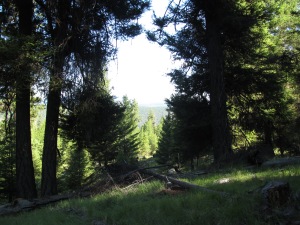 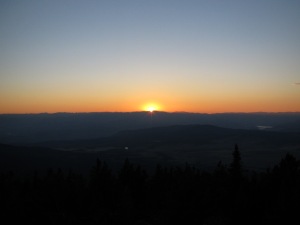 The lookout tower was full of neat stuff but the door was locked, dangit! It had a nicely made bed, binoculars, naturalist books, food, and anything a fire lookout keeper would need to stay up there for a while. Their job is to sit up there and look. I think I want that job. Note taken. The almost full moon moved over us through the night, lighting the valley below. We camped so that we would be able to see the sun rising, we set our alarm for 5:18 am, the earliest we’ve woken up in our entire lives, but it was worth it to see the day begin. I pooped happily in the keepers privy, relieved to not worry about digging another hole for a day. We loved this campsite, and because we got up so early, we were set to hike a nice big day of miles, getting almost all the way into town, but not before camping at another great spot on a ridge above the valley with the towns of Tonasket and Oroville. 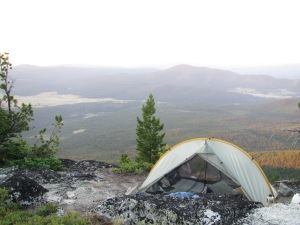 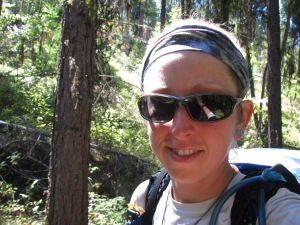 The walk into Oroville was over 100 degrees and we are here now watching the hillside burn up in another wildfire that we hope won’t get in the way of our route to Loomis, our next stop before we get into the North Cascades National Park. We are very excited for the second half of this trip. We have walked roughly 600 miles and have roughly 600 more to go! All is well out here with Ted and I.